Coimbatore the second largest city in Tamil Nadu after Chennai is the fastest growing tier-II city of the state. Located on the banks of Noyyal River, Coimbatore is popular for many things like auto components, poultry, jewelry and wet grinders. 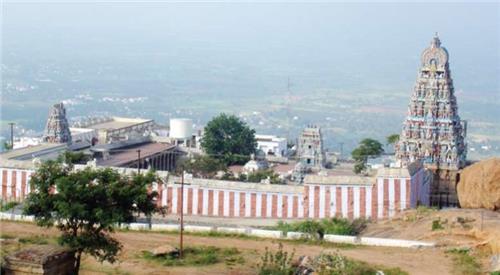 Thiru Kodimaada Chenkundrur is one of the main attractions near Coimbatore. It is an ancient temple located on a hill near Tiruchengode which falls about 120 km from Coimbatore. The temple belongs to Lord Shiva and is believed to be one of the 64 manifestations of Shiva and it also represents the unity of Lord Shiva and Parvati. The hill where the temple is located is red in color thus giving it the name, Chengode. The temple is also the 4th of the 7 Tevara Stalams in the Kongu Region of Tamilnadu.

Long time ago Lord Vishnu visited Kailash mountain to worship Lord Shiva along with Bramha and Indra. They were directed to meet lord Shiva by his vahana the Nandhi. As a custom, everyone first took the blessings of Goddess Parvathi before proceeding to worship Lord Shiva.But, Sage Birungi skipped meeting Parvathi and directly went on to meet Lord Shiva, which caused her anger and in a fit of rage, she sucked a handful of flesh from the body of Sage to stop him from meeting Lord Shiva. But, Sage didn’t stop there. He went on to meet Lord Shiva.

Located at the top of the hill on a flat surface is the idol of Lord Subramanya known as Chengottu Velar. The shrine for Chengottu Velar is located on the backside of the sanctum sanctorum. Sangu Theertham is the theertham of the temple. The sanctum faces the west side and the entrance to the temple is from the south side. The main attraction of the temple is the water spring that the foot of the idol. This spring is said to be manifested by divine. The spring is known as “Uli Padaa Uruvam”. One can take rest in the mandapams that are available on the flight of steps that lead to the temple. The carvings in the mandapams are beautiful and show the skill and workmanship of the artists of that period. The inscriptions on the walls of the temple belong to the period of Parantaka Chola, Gangaikonda Chola, the Vijayanagar & Mysore Kings and the Nayaks. One can also see a 60 feet snake carved on the hill.

Every day the deities are offered three services of pooja. Artha Jaama Pooja is a worship offered to the deities of the temple late at night. On every new moon night special poojas are offered in the temple. The idol of ardanareswar is brought down the hill for celebrations during the Vaishaki the Tamil month.