Perur Pateeswarar temple which is located 7 km west of the Noyyal River is dedicated to Lord Shiva. The temple was built by the Palayakarars and the Sanctum, innermost shrine of this temple was built by Karikala Chola in the early Christian Era. In the Kongu Chola Period, Ardha Mandapa and Mahamandapa were built and used for inscribing the details about the abundant gifts made to the temple. The origins of this temple go back to thousand years.

Lord Shiva, known as ‘Patteeswarar’, is the main deity of this temple along with his consort Parvati, who is known as ‘Pachainayaki’. The divinity is said to be ‘Swayambu Lingam’ or self emerged. Later, the Vijayanagar and the Hoysalas kings made contributions to this temple. There is a Patti Vinayagar shrine, devoted to Ganesha. The Arasambalavanar Shrine committed to Shiva at the spot where Shiva is supposed to have performed his Thandav under a peepul tree. There are also figures of Bikshadana, Gajasamhara, Oordhva Thandava, Virabhadra,  Saraswati with Veena. The sacred trees related with temple are the tamarind trees and Palm tree, called Irava Panai and Pirava Puli. 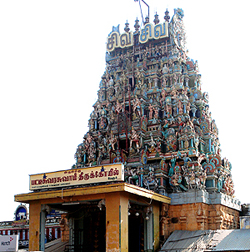 This temple has numerous gopurams and halls, prominent of which is the one with the golden sculpture of Nataraja. The pillars have carvings of the various signs of Shiva and the ceiling has a series of stone chains. The foot print scar of kamadenu the divine cow is visible on the head of Shivalinga in the temple. The tamarind tree in front of the temple which is known as Piravapuli and it means that its seeds will not grow wherever sown. There will be no worms and insects in the cow dung in the nearby area. Lord Nataraja generally appears in all temples in an active dance position.  The difference in this temple is that he appears with legs downwards showing the end of the performance. He looks slightly playful.  With dazzling cheeks and the hair falling behind, the appearance is quite pleasurable to the eyes of the devotee. Margazhi Tiruvadhirai is the most important festival celebrated here. Hence, it is admired as Melai Chidambaram (Chidambaram of West).

The temple has an exclusive collection of stone statue carvings, the like of which is not found elsewhere. Its two rows of ten big pillars have beautiful carvings of manifestations of Shiva. Its terraced roof has a series of stone-chains with numerous blossoming petals of lotus at the centrum. The smaller pillars have a large number of legendary carvings. The Cars have fine wooden carvings which create a center of attention the cupidity of even foreigners. The idols excel the other temples in exquisiteness. Even the small shrines surrounding the main temple are very ancient inscriptions of high value.
Pooja Time:
Morning 7.30 A.M To 9.00 A.M
Before Noon 11.00 A.M To 12.00 Noon
Evening 4.30 P.M To 6.30 P.M
8.30 P.M To 9.00 P.M
Vazhipadu Time:
Morning 5.30 A.M To 1.00 P.M
Evening 4.00 P.M To 9.00 P.M
Monthly and Weekly Festival:
Address: Vadapatti -Perur Road,Perur, Coimbatore,Tamil Nadu 641010
Arulmigu Patteeswarar Swamy Temple, Perur,
Phone: 0422 - 2607991.
Fax: 0422 - 2606849.
E-Mail ID: patteesaperur@gmail.com
Executive office,
Arulmigu Patteeswarar Swamy Temple,
Perur,Coimbatore - 641 010.
Phone: 0422 - 2607 991, 2606 849