The historic Noyyal River is originating from the sacred Velliangiri Mountains (a division of the Nilgiri Biosphere Reserve, are located at the Western Ghats mountain ranges border of Coimbatore in the southern state of Tamil Nadu. The source of Noyyal River being the Vellingiri hills, the holy waters then streams for about 180 km through the districts of Coimbatore, Erode and Karur districts prior to falling into the Cauvery River near Noyyal village. 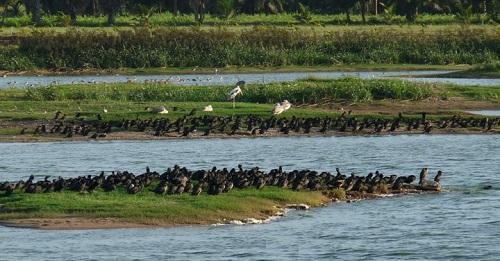 Keeping the annual rainfall and water of the northeastern and southwestern monsoon season into consideration, the modernization of the Noyyal River Tanks System to manage any condition related to overflow is ecologically crucial.

One of the most sacred rivers of the southern state of Tamil Nadu, Noyyal River was once mentioned as Kanchinadi but later gained its present name which refers to the name of the point where it pours into the river Cauvery. The Coimbatore town was once fenced by the Noyyal River and its channels and streamlets.

The Noyyal River along with its interlinked tanks and channel arrangements are considered to have been constructed by the Chalukya and Chola powers. The system was so effective that it offered water conveyance, water storage, and helped in maintaining unchanging water levels under the ground. Excess water from the Noyyal River poured forth into the channels and were conveyed to the storage tanks, forestalling overflowing situations.

The storage tanks were a crucial component in refilling the spring water through infiltration of the undersoil body of water. As urbanization developed, the arrangement was disregarded and the number of operational storage tanks was reduced in a drastic manner as only 11 storage tanks were left. Nowadays, the arrangement functions no more and water is deficient when compared with the demand. As a result, farming has significantly reduced and the lacking irrigation water supply impacted in thousands of Coconut trees in the region left to dry up.

Kanchimanadhi, Periyar and Cheyyar are some of the most significant tributaries of Noyyal River. Periyar pours out of the Siruvani Hills and the Kovai Kutralam, an iconic waterfall of Coimbatore. Cheyyar courses through Chaadivayal and along with the other rivers combines at Kooduthurai (also known as Mukkoodal is a sacred place located in Bhavani populated area very close to the Erode district, Tamil Nadu).

Subsequently, going through a length of 160 km, Noyyal River connects Kaveri at Kodumudi (a panchayat township in Erode district). This particular location is called as Noyyal. Apart from these three tributaries, there are a lot of other streamlets are connecting Noyyal. Nonetheless, many of the streamlets find water only during showery times of the year. Noyyal River has 23 check dams as well while Aathupalayam Dam and Noyyal Orathuppalayam Dam and Reservoir being the most significant ones.

The Noyyal River, being a nature spot is not away from the controversies as a report submitted by the National Environmental Engineering Research Institute said that the contamination degree in the water sample gathered by the officers from the Noyyal River was very much above the acceptable criteria. Nevertheless, campaigns and efforts by various local volunteers towards the preservation of the Noyaal River are progressing in full swing.

Explore more about Geography of Coimbatore