Marudamalai temple which is situated at the top of the hill 15km north west of Coimbatore is a popular temple of the Hindu God Murugan. Lord Muruga is glorified as the God of mountain and mountainous regions in Thiru Mugurugatrupadi, a renowned work of Sangam age Tamil Literature. This is one of the ancient temples and is said to belong to the 12th century. The word Muruga is a inclusive term, connoting several meanings such as beauty, sweetness, divinity, youthfulness and honey. Therefore it is but natural for the Lord to have His abode amidst picturesque beauty among hills and mountains.

The beautiful Marudamalai temple in Coimbatore is a perfect place to seek divinity and can treat with an architectural amusement. Positioned at a height of about 500 feet in a plateau on the western Ghats, amidst flourishing vegetation and healthy climate. Marudhamalai Hills, dedicated to Lord Muruga (Dhandayudhapani) is classified under Kunruthoradal who was the six main abodes of the God, the others being Thiruvavinankudi (Palani), Thiruparangunram, (Near Madurai), Thirucheeralavai (Thiruchendur), Thiruveragam (Swamimalai) and Pazhamudhirsolai (Azhagarkoil Near Madurai). 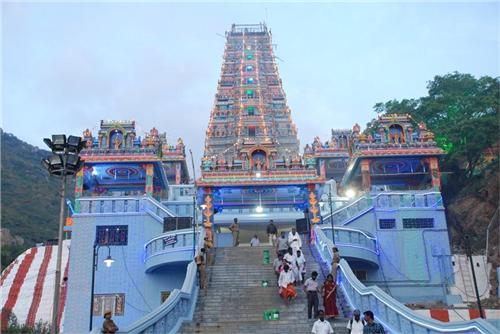 It is considered second to Arupadai Veedu temples in terms of religious importance for devotees. The Kongu Vettuva Gounder kings ruled this temple in its initial days.  The peak on which Marudamalai Temple is situated is called Marudha Malai meaning 'hill of vegetation' and has many curative herbs.

References to this temple are found in inscriptions in the Thirumuruganpoondi temple.  The hill is also home to a particular division of tribal Tamil people which is an attraction in itself. The temple in recent years has been refurbished and the local business community is supporting this activity.

The source of the temple is rooted in legendary ancient times and dates back to the age of Surapadama, the evil spirit ruined by Lord Subramanya referred to in Skandapurnam. Lord Siva comforted the Gods that Lord Muruga would come to their help, root out and destroy Surapadama and his follower’s enmasse. The gods should hasten to the Marudhamalai Hills and await the advent of Lord Muruga, their rescuer, Perupuranam also alludes to a king called Kusathvajan, who, it is said, was bestowed with a male child, only after worshipping Marudhamalai Muruga. Kamadhenu is reported to have grazed in the pastures of the hills of Marudhamalai. Perurpuranam had listed the three adjoining hills Nili, Vellingiri and Marudhamalai as the very demonstrations of Lord Siva, Parvathi and Subramanya correspondingly and the three hills taken together as the very representation of Somaskanda. The sacred shrine replicates the picture of Lord Muruga, marvelously mounted on his beautiful vehicle peacock, and swaying its feathers in full bloom. 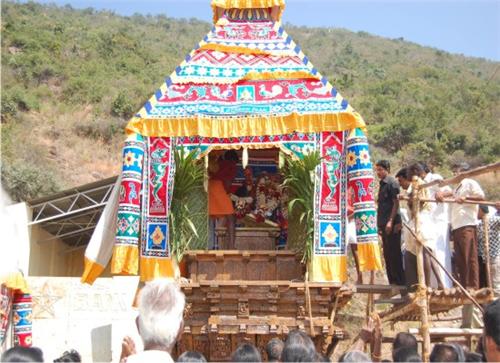 For the benefit of devotees the temple runs three mini buses from foot hills to Hill Top. Devotees have given the facility where they can walk through the steps where electrical lamps are fixed on the two sides for the safety of devotees. The temple also plans to have a rope car from the foothills. In current years number of nature cure clinics has come up nearby this hillside.
Pooja timings
06.00 A.M: Viswaroopa Dharsanam (ushakkalam)
09.00 A.M: Kalasandhi Pooja
12.00 P.M: Uchikkalam Pooja
05.00 P.M: Sayaratchai Pooja
08.30 P.M: Ardha Jama Pooja (Rakkalam)