Located on NH 47 between Coimbatore and Palakkad, Ettimadai comes under Coimbatore Corporation. People visit this suburb for the natural beauty it has to offer as it is situated along the foot hills of Western Ghats.

Several villages comprise this suburb which include Solakkarai, K.G. Chavadi, Chinnaya Gounden Pudhur, Muruganpatti, and Modamaatti. Ettimadai has a railway station which has made travelling to this town easy. Ettimadai is 21 kms. from Coimbatore and it is a good idea to reach here and spend a day in the cradle of nature. 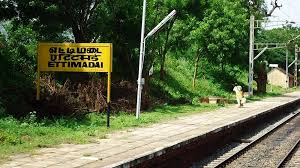 The total population of Ettimadai according to 2001 census was 7,887. People here speak Tamil  which is also the official language of this place. PIN of Ettimadai is 641105 and telephone Code is +91-422. Vehicle registration numbers are generally TN 37, TN 38.

Ettimadai to Vellakoil Old bus stand on Coimbatore road is around 62 miles or 100 kms. It takes about one and a half hours to travel by road, depending on traffic conditions. The distance from Kuniamuthur Police Station to Ettimadai is 12 kms. or 8 miles only.


Addresses of Police Stations near Ettimadai

The total population of Ettimadai, according to 2001 India Census stands at 7887 which includes 51% male population and 49% female population. 13% population comprises of individuals under six years of age. Although there are a few good schools and colleges in Ettimadai, the average literacy rate is quite low, that is, 56%. Southern Erode has a significant population which migrated from Ettimadai in the 18th century.

ETMD is the Indian Railway station code for Ettimadai Railway Station. There are two platforms in this station.

The airport closest to Ettimadai (Coimbatore) Railway Station is Peelamedu Airport. It is around 22 kms or 13.6 miles. Cochin International airport is 100kms. or 62 miles approximately.

Explore more about Localities in Coimbatore