Annur is a tehsil and a suburban area of Coimbatore city located in the north-east direction from the city. Annur is situated in a midpoint between Sathyamangalam and Coimbatore city. Annur is precisely situated in the junction of three significant road routes, Annur - Mettupalayam road to north east of Coimbatore, NH 209 (Coimbatore - Bangaluru) and Annur - Avinashi road. Annur is fenced by other suburban areas of Sarkarsamakulam, Karumathampatti, Tennempalayam and Kanjapalli. 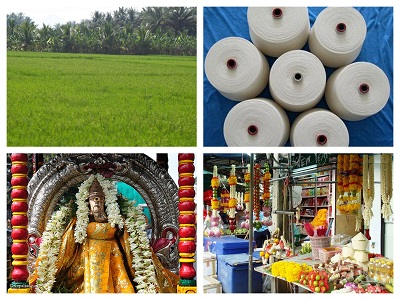 The etymological distinction behind the name Annur has various accounts to its credit. One such widely believed account is that the term may have been derived from the term 'Vanniyur' which later attained a completely different form and became 'Anniyur' and finally transformed to Annur. The traditional story accepted as history of Annur states that over a thousand years ago, a huntsman hit a rock under a Vanni tree. Subsequently, the tree started bleeding which took the hunter by surprise. He then reportedly called the people of the village to look after this mystery. Afterwards they discovered a Suyambu Lingam (Lord Shiva) Idol and decided to establish a temple at the very spot.

Annur is a crucial name on the list of rapidly growing suburban areas of Coimbatore Rural zone with its healthy business insightfulness, substantially connected routes to nearby localities including Tirupur, Sathyamangalam, Mettupalayam and Avinashi. An assorted range of business fortunes established Annur as one of the hotspots for commercial enterprises and realty objectives. The prosperous drinking water supply system is another eminent advantage that the town has to feature.

The last 20 years was a determinative period of time for Annur as the region witnessed stable rate of growth and advancement in the business areas like cotton value chain. Today Annur has came forth as a definitive hub for cotton ginning and spinning facilities and a primary share holder of Tamil Nadu's GDP. Apart from Coimbatore and Tirupur, Annur has become an important participant in textile markets in the country.


Places to Visit in Annur


Explore more about Localities in Coimbatore